Nikon D7000, Canon 550 D, Nikon 5100 – G was on constant research for the past few months. Well, he was researching on DSLRs for a longer time, to choose among the 3 mentioned, it was a few months. I was not totally convinced that we need a SLR. We have a good Canon point and shoot S3 IS, and the person who uses it most is me. Ofcourse we had our discussions and anrguements. I did not find it sensible enough to spend thousands on something, we were hardly going to use.

D7000 was definetly a no from my side as it cost around 70K. I was finally ok with either of the other two cameras as they were nearly half of the first one. Fortunately, D7000 is not in stock from quite some time, hence leaving us with two cameras to choose. Last week we became the proud owners of Canon 550 D. Our anniversary is coming up this month, and what better gift to us, from us, which will be used by us.

As of now, both of us are exploring the camera. And I must say, I am enjoying it. It definelty worth it. Here is my fav pic till now, taken in Lalbagh on 6-May-2012. Reminds me of Cherry blossom in Macon, USA 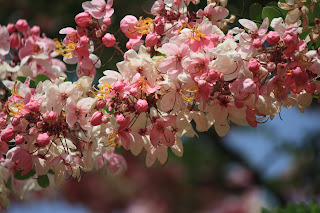 Thoughts by Art at Monday, May 07, 2012
Email ThisBlogThis!Share to TwitterShare to FacebookShare to Pinterest
Labels: G

Nice photo. Waiting for your next story!