It was a hot day, and the moment we reached the palace (South Gate), we wanted to drink something. What better than tender coconuts. We were disappointed with the rates though. They kind of exploit the tourists. Point to be noted: The entrance is the South Gate, where you get tickets, to visit the palace.

After the tender coconut, we headed towards the ticket counter. As soon as you enter the gates of the palace, on the right is the camera counter. Visitors are supposed to deposit their cameras in this place. Photography is not allowed inside the palace (bah!!). Everybody has a camera in their cell phone these days, and nobody stopped them from clicking pictures inside. I still dint get the point, why cameras weren’t used, because we can use flash, may be. Anyway, let’s go a little further.

As we near the entrance of the palace, there is a footwear stand. No footwear allowed inside the palace. It’s not a temple, probably they just want to maintain the cleanliness of that palace, and it’s pretty cool inside, so it’s ok.

Note: Both the camera and footwear stands are for free, so no money making there.

As soon as you enter, there is a counter where they have audio guides, Rs.100 per system. You can also hire, certified guides, but we chose to go with audio guides this time (experience sake). There are 21 parts, the numbers are displayed out there to let you know which part of the guide to listen to. The moment we enter, we first go to the place, where the dolls are kept. This is the place, where the family decorates the palace with dolls during Navarathri/Dussehra.

We then enter the corridor, adorned with beautiful paintings. If you really love paintings, you can spend a lot of time here. The audio guide actually explains a lot of paintings, the details in those paintings, which you might overlook. We enter the centre hall, just look upwards, and you see awesome glass paintings adorning the ceiling. The flooring is so amazing; it’s so colorful, you are thankful that you aren’t stamping these beautiful tiles with the foot wear. It seems weddings and birthdays and other important functions were conducted here.

Next we move to the gallery where the paintings of the Royal family are kept. Sigh!! You wish you were a part of them. Who knows, maybe we were in our previous birth, if such a thing existed. Then you move to a gallery of gifts, given to the kings (Wodeyars), by the places they have visited. There was so much of Sandalwood in that glass chamber, such intricacy in sandalwood, hard to find in our daily life. We then saw some more paintings and then moved to the courtyard. The palace has a mixed architecture. European, moguls, Hindu, and you can see all these in one place. It’s a good example of unity in diversity.

History: It seems there was a wooden palace earlier, and it burned down during one of the weddings which happened in the palace. The queen then made sure, no material which can be burnt would be used in the making of this palace. So the palace is kind of fire proof.

Ok... Now in the first floor, In between, we go through rooms where the furniture and other articles are kept for display. Once we cross these we come to a big Durbar Hall, which is open to the public. (Like Deewan -e- aam).

Again there are paintings, infinite mirrors (mirrors kept in front of each other, you get infinite number of images. The arches in this hall are so identical. It looks so beautiful. From here you can see the vast ground. Just imagining, the king sitting right in the middle, with dignitaries sitting around him, the ministers and important people next to him. The ladies of the palace sitting in one place, and on the ground, you see hundreds of people flocked up just to see the king, and the proceedings. You just get goose bumps. The carvings on the ceilings are definitely worth an observation.

No wonder it took 15 years to build this palace. From here we move forward and find the elevator, which was used in those times. Right after this, there is a passage which leads to an Ivory Door. It seems there is a Ganesha Temple behind this door, and when the fire broke down the whole palace, this temple remained untouched. Even today, the Royal family visits this temple. It's not open for the general public. Then we come across 2 doors which carved ivory. It seems these doors won a prize sometime in early 1900s. Next you go to a smaller Durbar Hall (like deewaan -e- khaas). It is so colorful. Just like those you would have seen in the movies. Aah!! I really wish I could have lived there, the chandeliers, the mirrors, the carvings on the pillars. Slowly, steadily, you move out of the palace.

After living through the history, for a couple of hours, you feel bad that you are out of the magnificent palace. You can go to the rose garden, there are some beautiful flowers. You can go to the gate and collect your cameras. Then you can click as many pictures you wish, outside the palace. There are quite a few temples inside the palace gates; you can visit them if you have time. We had seen these earlier, and since it was lunch time, stomachs were pleading us to give them something. Friends wanted to have pizza, so off we went to kalidasa road and reached Pizza Hut.

We had yummy lunch of pizzas and pasta, and left to Bangalore, but not before another pit stop. We planned to go to Shivana Samudra... But did we actually go there or take a detour, will be for the next post... Time to say Good Bye Mysore... and off I drifted off to dreamland in my sleep. 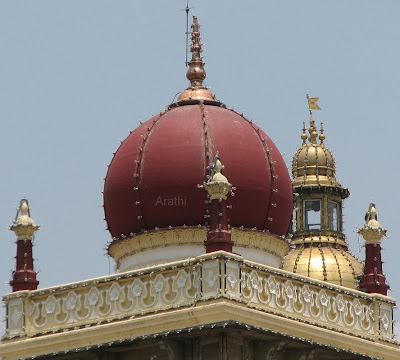 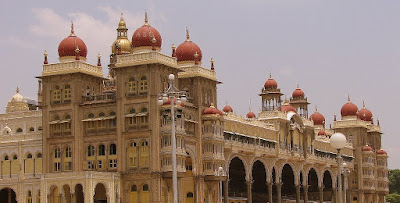 Thoughts by Art at Monday, April 25, 2011
Email ThisBlogThis!Share to TwitterShare to FacebookShare to Pinterest
Labels: Travelogue