Let’s go somewhere, anywhere.. Just need a break, this was my slogan whole of last week.

Since we were to go with friends, getting everybody on board was not so simple. Timings, locations had to match. Finally, it was decided that we would go to Mysore on Saturday afternoon and return Sunday night. My first reaction was – “Mysore??? Again!!”, to this my husband said, you just wanna go somewhere right, so I reluctantly agreed.

I love Mysore, the place has so much to offer, but I have been to Mysore so many times, we were there for a couple of years, and it was just 2.5 hours from our house, why go there for a whole weekend. But then again, any break was welcome, so we were all set by 12 noon on Saturday.

As it happens in most of the trips, we started a couple of hours late, and we were kinda hungry the moment we had started. But we thought of stopping for lunch in an hours time. NICE Road is a boon, we reached Mysore Road pretty soon, and then the usual scenery, of paddy fields, some shops here and there, Wonder La and Innovative Film City advertisements. There was nothing exciting or new about this stretch. By the time we reached Bidadi, we were hungry and decided to have some chocolates, until we reach a proper lunch place. Around 3.15 we reached Kamat Lokaruchi. The food here is mouth watering. Kamat is on the expensive side, but once in a while it’s still ok. We had the North Karnataka meals (speciality here). After half an hour of eating, we left for Mysore.

By 5.30 PM we reached our hotel, White Orchids (Bombay Tiffanys Franchise). It was nothing great, but 1200 per night with AC was something we did not want to complain. Anyway all we needed was to sleep that night in the hotel. 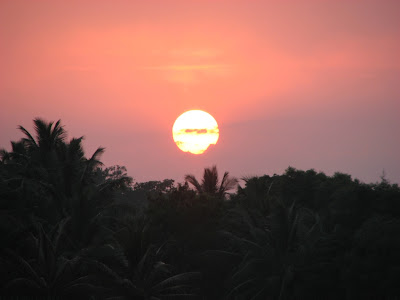 We freshened up, and were ready to visit the famous Brindavan Gardens. On the way clicked we encountered a beautiful sunset. So we stopped the car and took a few pictures. The road is pretty ok, to KRS Dam(Krishna raja Sagar Dam). Much before KRS, nearly 2 kms, we were stopped by a few people for parking tickets. Once we got this, on the left we could see the beautiful Dam. After parking our car, we walked for 5 mins to the entrance. Since it was a Saturday, there were too many people. One of us went to get the entry tickets and paid for the camera entry fees (Rs.50) I wonder why so much for the camera. Once we entered, it was the usual mela kind of environment. Lots of eatables, chilli Bajji, Gobi Manchurian, noodles, Banana Bajji, Aaloo Bajji, Onion pakoda, popcorn, American sweet corn… we dint eat any of this, coz of hygiene concerns (bah!!). We took a litre of bottled water and went near the bridge which would take us to the north side of the garden.

There is a ferry (Rs.20) one way which will take you to the other side. We took the ride, just for the sake of it. It was fun. Though we have been here multiple times, we never took the ferry, to avoid standing in the queue, this time we thought, whats the hurry… So after 10 mins of waiting, we finally got to travel in the ferry, and it was fun watching hoardes of people walking on the bridge. We reached the other side in 5 mins, and then as we got down, till we reached the place where they had musical fountain, dint I tell earlier, this was the sole reason people flock the north garden J

Anyway, enroute we saw some cute little fountains, we were telling a friend of ours, this was the place, so many movies were shot, with the celebs. Actually it was a lie. All this shooting was done on the south Gardens, which was the other side of the ferry ride, from where we entered. Anyway, we took a couple of hazy pics, and negotiating the fountains spray, we reached the amphitheatre around the musical fountain. They were playing Saare Jahan se accha (the last song the of the fountain performance) 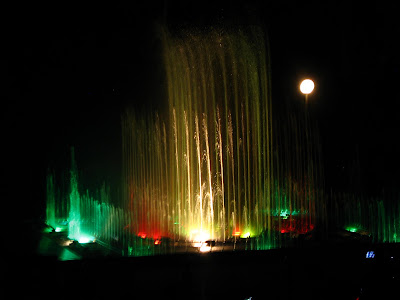 As soon as this got over, people got up and moved outside, we got on to those steps, and caught up with a nice place, with good view of the fountains. In 5 mins, the fountains took off with a famous Kannada Song. It was a nice attempt. As soon as this got over, there were a few hindi songs, and then a instrumental music piece, and finally Sare Jahan Se Accha Hindustan Humara Humara…. It was a nice feeling. There were whisteles and shoutings and lots of excitement.

After this got over, we headed towards a ice cream and had yummy Nutty Chocobars. This time we decided to take the bridge, and since it was nearing 8.30PM, the crowd was not too much. We had a nice walk on the bridge (not the dam), and then went out to have hot bhuttas/JoLA (corn). We then left to Mysore City to have dinner.

After much discussions, we decided to go to Metropole. This was once a palace, and now being used as a Star Hotel. Food is a little expensive, but the ambience is awesome, Food is good too. The restaurant is in the courtyard of the palace, so you are out under the sky full of stars. The highlight this time was the IPL match was on too. So good food, great ambience, a crowd which would react to every wicket and every four or six, made up for a great dinner.

We came back to the hotel, and contemplated if we should hit the bed, or play for a while, and play it was, and so we played cards for an hour and then left to our rooms, for a sound sleep, with plans to going to Ranganathittu Bird Santuary the next day.
Thoughts by Art at Friday, April 15, 2011
Email ThisBlogThis!Share to TwitterShare to FacebookShare to Pinterest
Labels: Travelogue

hii.thanks for sharing with us.I liked the way you put up the information.I visited br hills resort and also bandipur resort last weekend with my family. really enjoyed a lot.Do visit once.