Is there smoke without fire? 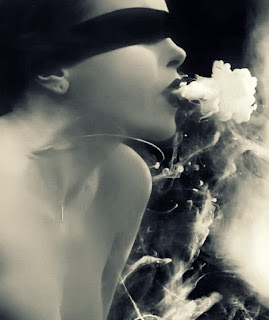 
“It’s too late now darling!!! I promise, you will see Magic tomorrow”, Celina promised. She had an idea, on what would be the magic Ryan would witness the next day.


Years ago, when she and her husband were just married, he would show her a lot of tricks masking them under the name of magic. And why wouldn’t he, that’s what he did for a living too. He was a magician. He was very popular, and used to travel to lot of places for these magic shows. One of the tricks was the smoke trick. It was their favorite. Celina wanted to learn the trick.


One night, he blindfolded her, and told her to concentrate on what he says. He taught the trick of creating smoke from mouth, without any fire. She followed his instructions, and could feel smoke making its way out of her mouth. When she opened her eyes, there was a lot of smoke around her. They spent all night smoking, without any fire or cigarettes. It was a fun night they had, blowing smoke at each other.


Initially, Celina accompanied her husband on all his shows. Once Ryan came into their lives, she had to stay back on days when Ryan had school to attend. It was one such night, her husband had gone for his shows, and she was alone with Ryan.


The next morning as she promised, when Ryan was busy fiddling his breakfast, he saw smoke coming out of Celina’s mouth.


“Whoa mom!!! You can do magic just like Papa… I love you” he jumped on Celina and hugged her.
For more entries see here
Thoughts by Art at Wednesday, August 12, 2015
Email ThisBlogThis!Share to TwitterShare to FacebookShare to Pinterest
Labels: Fiction, Story

Lovely take on the prompt