A Day Trip to Devrayandurga

Let’s go somewhere, anywhere, was the first thought on Sunday Morning. At 9.00 AM we decided, we will go to Devrayandurga.


The place is near Tumkur, its around 70kms from Bangalore.


We started around 11.00 AM from Bangalore after a heavy breakfast. From BTM Layout – Banerghatta road – Nice Road (toll road). We took an exit for Tumkur road (Nice Road Toll – Rs.120). The nice road was fairly crowded, with most of the crowd taking a deviation at the Mysore Road. Once we got off the Nice Road, we went to another toll road. We took a day pass here (Rs.30) and continued on the Tumkur road.


As we reached Dabbaspet, we had to get off the Tumkur road, under the flyover, towards Devrayandurga.  From here it was 20kms. There are directions boards everywhere. We anyway had our GPS on too. We reached the Urdigere junction, where there where the vegetable market was on full swing. We were 10kms away from our destination.


You could see a huge difference between the city and these areas, the people, the driving, the shops. Surprisingly, the roads were very good. There were few patches were the road was yet to be laid, but apart from those, it was smooth driving.

We finally reached the entrance around 1.00 pm, where we paid for parking (Rs.10). There is a fork, we took the fork leading to the temple of Bhoga Narasimha, this is at the base of the hill. We parked our car very close to the temple, and walked in. There was a queue, and we were in the queue for 15-20 mins. If there was a senior citizen who couldn’t wait in the car, they were allowed inside with a accomplice.


After the darshan, we next moved to the Devi Lakshmi temple, which is next to the Narasimha temple. We were given the teertha (holy water), after this darshan, and we headed out. Next to the temple is a hall where free food is served. We weren’t hungry so dint go there.

Near the temple, there were lot of small shops which sold waterbottles, cool drinks, mirchi bajji, various other bajjis, churmuri. Since we were very thirsty, we had cool drinks and water and started for the temple on top of the hill.


Note: There are free toilets to use, it is was clean.

The drive to the top was very scenic, and roads were again good. You have to be careful since there are hairpin bends and it’s a 2 way drive. Also, there are steps too which can be taken to reach the car park on top. We reached the car park. We could see the temple in between the rocks. 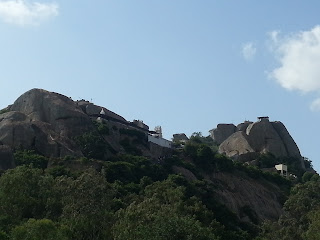 We walked till the entrance of the steps, and since it was very hot, we had cold badam milk (Rs.50 per can, too expensive).


We started climbing the stairs, and the moment you feel too tired, you can just look around and the scenary gives you the energy and the enthusiasm to climb the steps ahead of you. We really dint count the number of steps, but it might be around 200. There were several rest points too. There are too many monkeys around, so be very careful with the things that are taken there, especially if they spot any eatables, you will have to let go of them.


There is footwear stand as soon as we reach the temple, which asks for a nominal fee. This temple has the Lord Yoga Narasimha, and Devi Lakshmi. We decided to climb on top of the rocks after the darshan. We collected our footwear, and moved towards the starting point.


It is a very short climb, but yes, there are lot of thorny bushes, and rocks in between. At times you have to cross bushes, and walk as if you are walking on your fours. There might be monkeys lurking around too. But as mentioned earlier, if you are careful with the things, and don’t bother them, they don’t distrurb you. We did not have problems with the monkeys around.


We reached half way, and there was this huge playground like rock which gave us a spectacular nearly 360 degree view. The view of the kalyani (the pond) was mesmerizing even though the water was green. We took the customary pics, and sat there for a few minutes enjoying the breeze. We still had to reach the mantap on top, and we had reached half the distance. 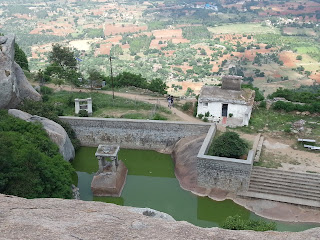 Yet to reach the top 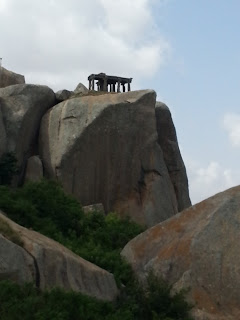 The route to the top was again filled with some rocks, gravel, bushes. A little bit of energy, and you can reach the top easily. The final part is where you have to climb a rock like structure, which might be slippery in the beginning. (If you have climbed Savandurga, this is nothing)


Once you reach the top, the mantap provides the much needed shade and a beautiful view. All you would want to do here is to sit and gaze at the view nature has provided. 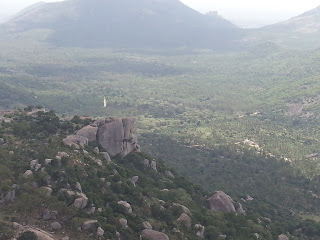 Temple from the top 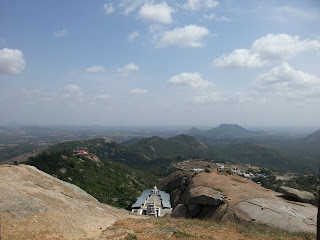 
We hadn’t taken water with us, and the thirst was increasing, forcing us to leave from the place. Also, to add to it, a big group of friends could be heard coming to the place. We started our descent from there. We had come down in 15 minutes.


After a bottle of water, we ran down the steps. We had some cut mangoes with salt and chilli powder. Around 4PM, we started from the car park, and reached bannerghatta road around 5.15 pm. After wading thru the traffic in Bangalore, we were home around 6.00pm.


A very good day coming to an end.
Thoughts by Art at Friday, July 10, 2015
Email ThisBlogThis!Share to TwitterShare to FacebookShare to Pinterest
Labels: Travelogue