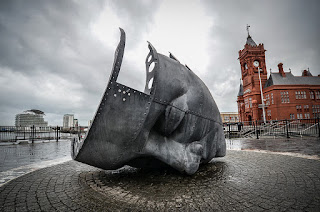 
“Give it back, you don’t want to face the consequences”
“I don’t care”


The siblings were fighting for it again.


“Stop this fight right now” Their mother was at the door, with her hands on her hips.


She came upto the mask, picked it up and threw it out of the window.People on the ground could see something falling off from the sky. It was huge.


It looked like a face. Was it a spaceship shaped in this way. Was it an alien who was coming down to earth?

As it came near the ground, people could feel the size was much bigger. They made space for it. In a few seconds, the mask nose dived. The people around couldn’t understand, from where such a huge face came from. All they could do is stare up, at the sky. Since nobody could move the mask from the place, they moved on with their work.


The day was over, the lights on the road were switched off, there was no movement on the road.

From somewhere up in the sky, one of the kids, took the torch and pointed it towards the mask.


On the ground, it seemed like a big flashlight focusing on the mask.


In a few seconds, the lips of the masks curled, and the closed eye opened.
For more entries see here
Thoughts by Art at Monday, July 27, 2015
Email ThisBlogThis!Share to TwitterShare to FacebookShare to Pinterest
Labels: Story

A powerfully imaginative response to the prompt. Well done.

Thank you Gemma... What's life without a little mystery :)

Loved the scene you created!

nice take on the prompt

Oh, this is different. Quite imaginative, I'd say :)