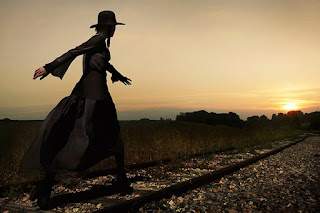 
Maria had to reach home before the sun set. Nobody in her house knew, what she did the entire day. She did not intend to tell them either. Her parents went to the nearby town to earn their living. Her mother worked as a maid in one of the rich households, and her father worked in a garage. She was a very short girl when she was young, her parents took her to the fair where she was fascinated by the tall people walking around with long costumes. She dreamt someday, she would be as tall as those people. In one such fair, she met a witch, the one who could read minds.

Every evening, Maria took the train, which would take her back home, in time before her parents arrived. They would wonder what she did every day, but would not question her, since she was always busy with the household chores. But that day, she had seen him, and was mesmerized by his golden eyes. She could help but stare at him, and lost track of time.

The witch she had met in the fair years ago, had granted her wish, although Maria had a price to pay. She was made tall and thin, so tall that she resembled a pole now. Her parents were worried on how she would get a suitable boy for marriage, but Maria was not bothered. It was her secret dream to be how she was now. She was happy. She went to the fair, and was given the job, she was so fascinated about. First day when she came home, she heard her parents discuss about her future. She wanted to disclose about her job, but was scared if her parents would reject it, they hated the fair and never let her go. She decided to reveal it to them when the time was right.

She wore colourful clothes in the fair. But on her journey, she preferred to wear black, so that people couldn't identify her much. She changed her hairstyle, with 2 thin plaits, and a hat to cover. Even if somebody met her in the fair, they wouldn't recognize her if they met her elsewhere. That fateful day, when she met the guy with golden eyes, she couldn't think of anything else. All she could do that day was to keep track of his movements. She knew she had seen him, his eyes seemed familiar. When her friend interrupted her thoughts, she realized, she would miss her train.

She reached home and heaved a sigh of relief, since the door was still locked and nobody was home yet. Half an hour later, her parents came in and along with them, came a handsome young man. Maria recognized him instantly. He was the man with the golden eyes from the fair.

“What’s he doing here? How do my parents know him? Will he recognize me?”, all these thoughts engulfed her. Before she could ask anything, her mother came running to her.

“Maria, do you recognize him? He is your brother. We had lost him in the fair years ago”

The memories came rushing to her. The witch had agreed to grant her the wish, if only she would part with her golden eyed brother. And Maria, who couldn't tell right from wrong at that age, had agreed for the exchange. Every day after that, Maria went to the fair, without her parents knowledge to find her brother.

Today her brother stands in front of her. She wants to hug him and apologize to him, but she is also worried. Does he know what she had done to him? Would he tell her parents if he knew? Although she was happy that her brother was back, her guilt kept her busy in a different world.